I was starting to find the maps on my RNS 510 were getting a bit out of date, after all I had never updated it since I purchased the car in 2009. I also read that newer versions of firmware also provided additional features, bug fixes and performance improvements, obviously! So I started doing a lot of googling and reading and found a wealth of information spread all over the place about how to upgrade both the firmware and maps on the RNS 510.

So having successfully updated both the firmware and maps on my unit I thought I would write a guide to summarise, in one place, how I did it.

First I will describe how I did the firmware upgrade, then I will move on to how I updated the maps.

1. Determine which revision of hardware/firmware you are running

There are various different versions of RNS 510 along with multiple different versions of firmware, so it seemed like a good first step was to work out what I had. You can find out the specific hardware revision by a) taking the unit out of the dash and looking for the part number or b) using a secret hidden menu.

I opted for the second option, I really didn’t want to have to pull the unit out. To access the hidden menu, simply press the setup button for around 10 seconds and a radio service menu should appear with a menu option called “Version info” – unfortunately, on my unit this did not work. It seems that on older firmware versions this hidden menu is not available. So I was struggling at the first step, I had no idea which hardware/firmware revision I was running.

Fortunately, I found a web site that was quite encouraging and convinced me to take the plunge anyway. A high-risk strategy, and I would only encourage you to take it if you are prepared to take the risk!

I found a really useful web site at gpsunderground here.

The chap here makes some pretty bold claims about which version of firmware works with with hardware revision, and the forum is full of people asking in broken English if it will work with their unit. So he basically says this:

I decided to go for firmware 5238, this also includes the video-in-motion (VIM) hack that stops the DVD player cutting out when you drive faster than 5mph.

You can get the download links from his site, but I’ll reproduce the links here, note that these links could go dead at any time:

After downloading, I used 7-Zip to unzip and merge the three files together into a single ISO image.

It’s small enough that it will fit onto a CD-R, no need to waste a DVD-R! I burnt the ISO at the slowest speed my burner supported, which was 10x. My laptop came with CyberLink Power2Go, which is a very basic burner, but it worked fine for me. I’m sure you could use Nero or some other burner and burn it slower if you wanted. All the advice I have read states that the RNS 510 optical drive can be a bit fussy, so best to burn at the slowest speed you can.

So now I had the firmware all burnt and ready I was itching to give it a go… but wait!

I work in IT, and whenever you do anything in IT you ALWAYS have a back-out plan. So what was I going to do if it all went tits up?

Well, turns out there is a recovery ISO that can help fix an RNS 510 if the firmware upgrade fails. I didn’t actually need it it in the end, but it sure helps calm the nerves knowing that it’s out there. Here’s one place you can find it.

Now there is a magic button combination you can press to get the unit into software update mode (Setup + Eject + Info/Mic – top right hand button next to the DVD slot) – I didn’t actually need this (not until later anyway) but it’s handy to know.

Open the car up but do not put the key into the ignition. I put the CD-R with the firmware on it straight into the RNS 510 and it powered up and started to read the disc. If it doesn’t power up then press the on/off button. Then it’s just a case of being patient, letting it reboot several times and following the prompts. When it starts updating you’ll just have to leave it for about 1 hour. With a bit of luck, everything will go smoothly!

WARNING: There is a real possibility you will lose all your map data and music files on the HDD – make sure you have a map DVD available to reload your maps, unless you are happy to worry about that later! 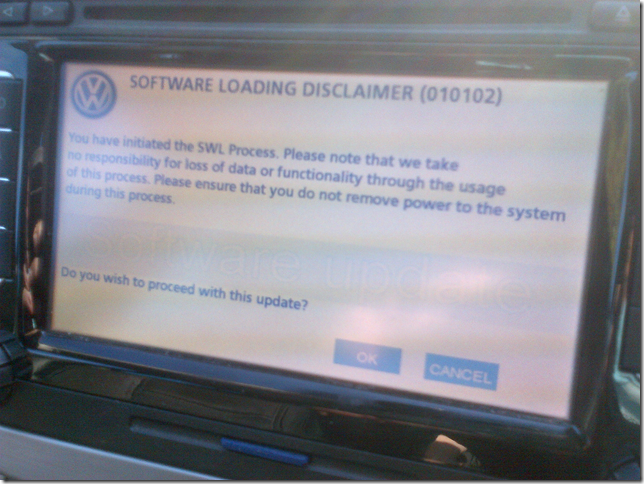 4. Check the upgrade was successful

After my unit rebooted I was curious to see if my maps and music on the hard disk had survived the upgrade process. They had not!

I don’t have a definite explanation, but I believe that whether the HDD gets wiped or not depends on which firmware version you were running – that’s why it’s nice to know what you are running so you can work out if you are going to lose your map data and music files or not. It seems that older firmware versions only used 2 hard disk partitions, one for the map data, the other for the music files. When you upgrade to a later version of firmware, it creates an additional partition for the new POI data available with the latest map DVD’s, so the upgrade may wipe your HDD to create 3 partitions. Of course if you are running a later version of firmware, you may already have 3 partitions, so may not lose anything.

BUT, it also seems that the map partition may not be big enough to hold all the data for the latest map DVD’s (the V12 Western Europe DVD is 5.5GB, compared with V4 which is about 3.5GB), so I’ve read somewhere that some firmware versions may actually resize the partitions, so even if you have 3 you may still lose all your files.

There are also other custom firmwares that change the partition sizes to give you more space for music files and not so much room for the POI data. Basically it all becomes a bit of a minefield trying to figure it all out so I didn’t really get too bothered about all this. But there’s plenty of info in the forums if you can be bothered to read it!

Anyway, I was curious to see how much space I had for music, and as the HDD icon in media player was greyed out, I knew it had been wiped. The way to get it back is to copy some MP3’s from an SD card, then you will see how big the music partition is. On mine it is only 13.8GB, this is definitely smaller than what I had before, I think I had around 20GB before, so I probably do have some wasted space for the POI database which I could reclaim using one of these repartitioning tools, but I will save all this for another day.

Next step is to check the hidden menu – I held down the setup button for about 10 seconds and sure enough it popped up. I selected version info and got this screen:

What is interesting is that this is showing my unit to be a “L” hardware rev (last character of part number), which seems to be quite a late rev considering my car is a 2008 model, but I’m sure I read somewhere that this firmware update actually changes the part number. No idea why, but I guess the only way to really check is to pull the unit and look at the physical label.

Anyway, you can see I am now running S/W version 5238, so that is all good. No map data is listed because I haven’t loaded the maps yet. So what I did was insert my original map DVD that came with the car, this is Western Europe V3, so is really old, but it copied to the hard disk and I was up and running in no time.