IMPORTANT: The capacitors may look perfectly fine and yet be bad, they look great at first, then deteriorate and cause damage to the ECU very quickly

The following are some of the models affected:

Please understand that any one of these symptoms can be a sign of ECU capacitors beginning to fail. - You do not need all or most of them to have this issue!

Your ECU capacitors are strongly suspected if you have at least one of the following intermittent issues on your Lexus or Toyota:


I was actually experiencing several of these symptoms including ECU not wanting to communicate!

So, with no engine diagnostic codes to work with, I checked all of the grounds, voltages and other obvious causes, and then in a MacGyver-Steve Jobs moment of insight, I decided it must be the electrolytic capacitors inside the ECU, which had appeared fine in an earlier inspection a few months earlier when the problems began. I suspected it was the capacitors because I discovered this problem back in the 1990's on Nissan 300ZX and the Mitsubishi DSM models. History just keeps repeating itself! - It was also bound to be ECU-related, because this diverse set of issues has only on thing in common - the ECU!

sure enough, upon re-inspection, the corrosive leakage was very bad, so bad that the main circuit board could barely be saved!, I replaced all 6 electrolytic capacitors, and now every single problem listed above is gone! - and the engine also seems to have more low end power than it had even before the symptoms above appeared!

if you recognize ANY of these symptoms listed above, bad ECU capacitors are a likely culprit!

I now believe any Lexus over 12 years old would greatly benefit from having ALL 6, 8, or 10 electrolytic capacitors in the ECU replaced with high quality new ones! - these were not part of a defective batch, but rather a quaternary ammonium salt capacitor issue, as explained by world-renowned ECU engineer Yamae in post #8 below. (we are very lucky to have him here at Club Lexus!)

this is NOT something a junkyard computer would solve, it is an age and sitting up problem, a junkyard ECU would have the same issues.

IMPORTANT: It is critical that you use the exact premium Japanese low ESR capacitors I have linked to below in the recommended capacitors section, even if you are having someone else do the work, the correct capacitors are very rare type and they will not have them locally - if they use other capacitors, the repair will not solve the problems you are having!

the power difference alone makes it worth doing, and just because an electrolytic capacitor looks good, doesn't mean it is - 93-97 LS models are showing up with this capacitor issue in particularly high numbers and other models such as SC model are showing up in high number on even earlier years such as 1992, this also affects the 2JZ and other Toyota engines!

a new ECU would also solve the problem, those cost $2400 at the dealership, the parts I used to make mine just like a new one are less than $20 delivered from Digi-Key - and it is important to order from an authorized dealer of these great capacitor brands in order to avoid counterfeits - so FORGET EBAY, AMAZON, ETC.

it is CRITICAL that the replacement caps be low ESR type and from one of the brands listed above - don't cheap out on your vital ECU!

WARNING - DANGER: this is not a good first-time soldering project, the existing capacitor removal and associated desoldering, cleaning, inspection, soldering and re-inspection is involved and is in some very tight places, you must be experienced at soldering and pretty good at it, or else you need to locate someone who is very experienced at soldering, and then you should buy the special capacitors this job requires, and then let him or her do the operation of replacing them - the NipponDenso ECU in your LS400 is a delicate piece of very expensive electronics. If you wouldn't feel comfortable taking apart a laptop computer and getting it back together successfully, then you probably do not want to be doing the electronic portion of this repair.

If you need further advice on recapping, you can post here in this thread!

I would advise you pull the ECU and verify the cap values before ordering, to make sure. You can reinstall the ECU in 5 minutes (leave the lower glove compartment out for now) and you can drive the car until the caps arrive in the mail from DigiKey (normally just a couple of days)

WARNING: You must use premium Japanese low-ESR capacitors for this repair to be successful, this kind of capacitor is very rare, they do not stock it locally, you must order it from the links below!

1998 and up owners: you can replace the capacitors of your original ECU without affecting security and the theft deterrent system, but keep in mind that if you get another ECU say from ebay or a junkyard, it will have to be reprogrammed by the dealership or a better locksmith before your car will start with any ECU that is not the original one that came with your car!

WARNING: You must use premium Japanese low-ESR, high temperature, long life, high ripple rejection capacitors for this repair to be successful, this kind of capacitor is very rare, they do not stock it locally, you must order it from the links below!


DANGER! - Will Robinson - COUNTERFEIT capacitors are a SERIOUS EPIDEMIC - make damn sure your capacitors come from the factory authorized sources below, those capacitors you found a deal on, on ebay or elsewhere online are very likely FAKES! - most premium Japanese capacitors in the United States are shipped from three principle distributors: Digi-Key, Mouser, and Newark Electronics. Anywhere else is likely a questionable source!

the voltages specified in the recommended caps below are sometimes higher than the originals, this is a good thing!

who got me thinking about how ECU's operate in my head, which lead to this breakthrough! (and also thanks to TV character MacGyver, it's what he would have done!)

no one understands Toyota ECU operation and design on Club Lexus anywhere in the same league with our special Japanese guest Yamae!

just consider him a guest expert ECU engineer from Nippon Denso, and you wouldn't be far off.

always disconnect the negative battery cable before disconnecting or reconnecting an ECU
beware: there is at least one hidden bolt inside the lower glove box behind a secret panel (not joking about this) the diagram below will help, but it can be a little tricky to get the lower glove box out the first time, just keep at it, and you eventually will locate all of the fasteners 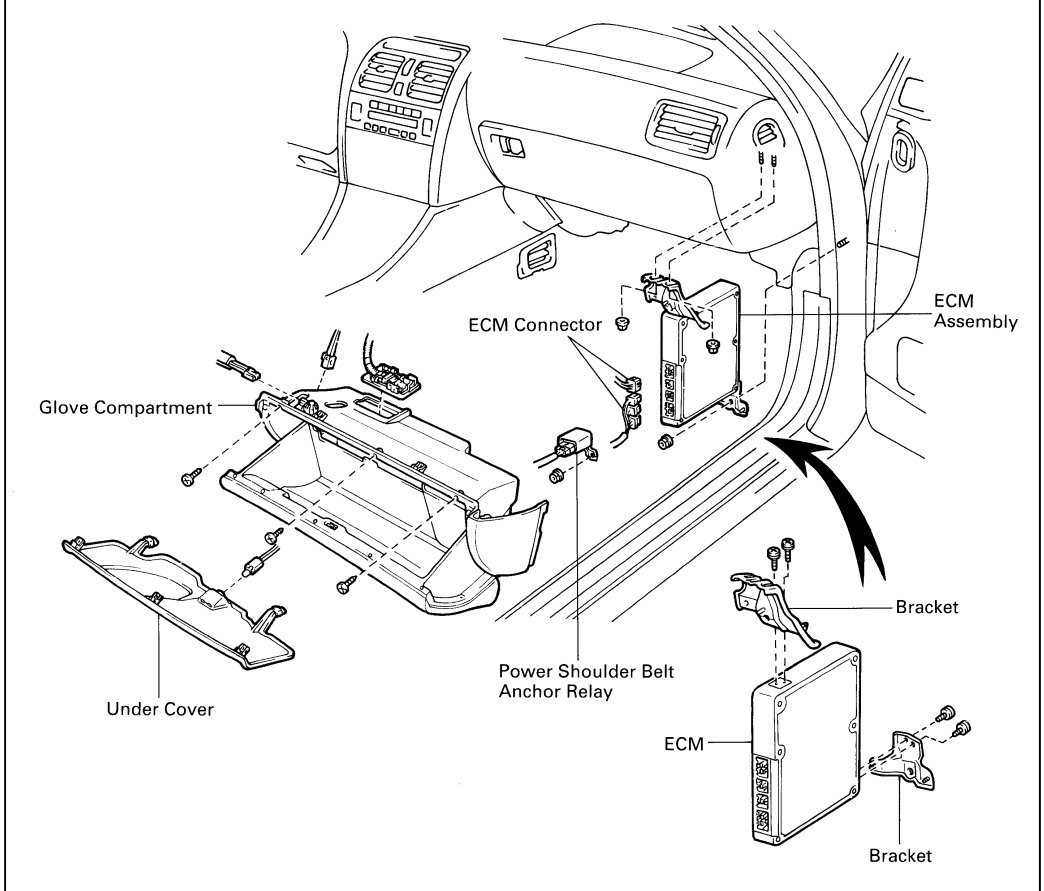 WARNING - DANGER: this is not a good first-time soldering project, the existing capacitor removal and associated desoldering, cleaning, inspection, soldering and re-inspection is involved and is in some very tight places, you must be experienced at soldering and pretty good at it, or else you need to locate someone who is very experienced at soldering, and then you should buy the special capacitors this job requires, and then let him or her do the operation of replacing them - the NipponDenso ECU in your LS400 is a delicate piece of very expensive electronics. If you wouldn't feel comfortable taking apart a laptop computer and getting it back together successfully, then you probably do not want to be doing the electronic portion of this repair.

I take NO responsibility for any damage you do to your ECU from any information you obtained from this post. DO THIS AT YOUR OWN RISK!!! If you completely hose your ECU, don't come whining to the cowboy! Nor do I want it sent to me for repair! Untangling someone's 'handiwork' is more frustrating than battling the original problem! If you have any doubts about your skills, DON'T TRY THIS!! - If you do screw it up, it is not the end of the world, just purchase the same part number ECU on ebay from a high rated (99.5%+) seller for around $125 or so and find someone to do this cap replacement job who has experience.

Also - NEVER use 'cold heat' types of soldering irons!! They work off the principle of an ARC welder, and emit a current. This can instantly destroy your ECU board when contact is made. If a good soldering station is not available to you, a 40 watt solder pencil with a standard tip on it will work fine.

if you have patience and soldering skill, it's not too difficult!

here is what I did:

CAUTION: BE VERY GENTLE with flexing the 2 or 4 gray ribbon cables that connect the 2 mainboards - they will not tolerate rough handling! - they will take a normal amount of flex required to open up these boards flat for working on them, so you don't have to be a complete scaredy-cat!

CAUTION: - static electricity can kill an ECU - some people wear anti-static wrist straps, but I find them a pain, here is a better plan and what I do in my electronic's bench: all 100% cotton clothing and bare feet!

FIRST: - take photos of what caps go where originally, plus make a DIAGRAM of cap sizes & placement!

1. - remove old caps using soldering iron heat or desoldering iron and a simultaneous back and forth tug after making diagram of values and placement, just keep tugging, they will come out
2. - gently brush areas of board where caps were using toothbrush with baking soda/water paste to remove any acid leakage residue
3. - wash area with vinegar to remove any caustic base damage
4 - inspect board copper traces to insure that they are still intact, it is OK if they are now a brighter copper color than surrounding traces, but severed or completely eaten away traces will require professional repairs and you are probably better off getting another ECU from a junkyard or ebay and replacing the caps in that one
5. - rinse board with distilled water to remove vinegar acetic acid
6. - rinse board twice with 91% isopropyl alcohol
7. - inspect desoldering job with loupe
8. - using medium large safety pin, re-make holes in desoldered pads in board to accommodate easy installation of leads of the new caps, heat up the solder pad, insert safety pin, let cool and the stainless safety pin will twist right out, leaving a perfect hole for new cap leads!
9. - solder in new caps, double checking polarity (+/- orientation) - use 63/37 rosin core solder, and get some rosin solder flux (I like Radio Shack p/n 64-022) and cover the solder area well - slather it all over where the new caps will be soldered - the new capacitors do not like extended heat, just get in and get out with the soldering iron, and make sure iron is ample wattage (like 40W+) - I do not like to apply heat for over 3-4 seconds at one time. Use LIBERAL amounts of the RS/CAIG rosin flux mentioned above in the parts list, this is the key to making the soldering process behave!
10. - trim leads on reverse side of board of each installed cap with clipper
11. - rewash board with 91% or higher isopropyl alcohol
12. - inspect soldering job with loupe
13. - blow compressed air to make sure no clipped leads or stray solder remain on board, use about 25 PSI or less, it's a circuit board, not a crankshaft!

14. - Once ECU is reinstalled into car and everything is reconnected, only then do you want to reconnect the negative battery terminal
15. - BEFORE cranking engine the first time, click the ignition switch over to the RUN position for 1 minute to let the other ECU components acquaint themselves with the new caps and let them precharge.

Thanks to Yamae for researching the part#'s for the North American ECU's.


As far as I investigate the variation of the ECU for the North American market, there are ECUs as follow.